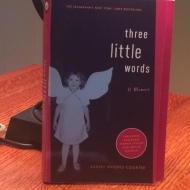 If you’ve never had contact with the child welfare system, consider yourself lucky. My work takes me into that world on a daily basis, and while I’m familiar with the system’s failures, Ashley Rhodes-Courter‘s Memoir, Three Little Words,  provided me with a new perspective—that of the children I and so many others work to protect. Despite my years of interaction with this system, Ms. Rhodes-Courter’s memoir was both enlightening and frightening.

The system is broken. I think anyone who works within our child welfare system or has had any contact with it knows this. However, Ms. Rhodes-Courter’s memoir expanded for me the breadth and depth of its dysfunction. As a general rule, the adults who work on behalf of the children who come into the care of the State tell them little. Some are not allowed to talk about it, others choose not to out of a misguided attempt to protect the children from the truth. Ms. Rhodes-Courter reminds us that children are smarter than we think, that they see and hear more than we as adults give them credit for, and that keeping them in the dark regarding their own lives can be more damaging than giving them the truth they so desperately seek.

Further, like many children, the State failed Ms. Rhodes-Courter and her brother not just once, but many times on many levels, through multiple agencies and at least two states. The problem is systemic and widespread, which is largely due to our unwillingness to invest financially in the agencies and people who are tasked with removing, placing, and finding permanent homes for children whose parents are either unwilling or unable to care for them. And, as Ms. Rhodes-Courter points out, had the State assisted her mother financially to the same extent they were willing to finance the foster homes where she was placed, her mother may have been able to create some stability and fulfill her promise to her “Sunshine”–her repeated promise to take Ms. Rhodes-Courter from foster care and bring her home.

It was a volunteer, a court appointed special advocate, or CASA, who ultimately made the difference for Ms. Rhodes-Courter by advocating to move Ashley and her brother from an abusive foster home, fighting to return Ashley’s few prized possessions to her, pushing the system to put Ashley in a safe place and actively search for a permanent home for her. (*Spoiler Alert*) Her adoptive family never gave up on her, and in time, their love and support restored the trust that the system had shattered. Ms. Rhodes-Courter finally learned the meaning of “home”.

Though difficult to read at times because of its honesty, Ms. Rhodes-Courter’s story is truly inspirational and her resilience remarkable. In lieu of a wine recommendation, I’m asking that you consider donating the amount you would typically spend on a bottle of wine to your local CASA organization. You can find it by entering your zip code in the Find A CASA locator on the National CASA website: http://www.casaforchildren.org.

One response to “Three Little Words by Ashley Rhodes-Courter”

Author of Contemporary Fiction for Women and Young Adults

Life Through the Big Screen

A podcast where I invite guests from all walks of life to discuss their favorite movies, and we use that film as a starting point to talk about deeper issues such as faith, politics, and social issues.