The Outlander and D’Autrefois 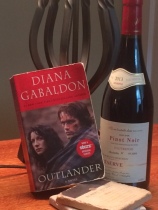 Diana Gabaldon’s first book, a historical romance titled Outlander (you may have heard of it—Starz recently created a series based on it) was intended as practice, just to see what it would be like to write a novel. Though it tends to wander and one scene near the end is distorted and just plain confusing, overall it’s an interesting, if long, read. By “long” I mean 850 dense pages. By “interesting” I mean entertaining and compelling.

Her main character, Claire, is a capable, intelligent, stubborn woman who finds herself in circumstances out of her own time and any logical understanding. Her obstinacy, love, and compassion drive her to fight on and persist in mostly shrewd ways. Despite her experience as a wartime nurse, she repeatedly underestimates the dangerous nature of her new environment, mainly because it’s simply outside the realm of possibility in her personal experience, having been suddenly thrown from 1945 British Isles into 1743 Scotland, which was at war not only with the British, but internally between clans. In this largely uneducated society where burning witches at the stake was an acceptable and common practice, Claire’s modern knowledge and behaviors are inherently dangerous.

The historical aspects of Outlander were compelling for me and drew me along where the story, romance, or characters started to lag. The setting and Claire’s experiences in it made me wish I knew more about Scottish history, both so that I could better understand the nature and depth of the perils she might be facing and how her presence and actions might, or potentially may already have, impacted her modern day.

What to drink with an epic historical romance like Outlander? Well, Claire is treated to a wine she describes as a very strong and delicious rosé by one of the Scottish chieftains, but I’ve yet to be introduced to a British or Scottish wine. If you know of one that you would recommend, please comment so that I can try it. For now, I’d recommend a light French pinot noir called D’Autrefois. It’s flavorful and has a reasonable price point so you don’t have to make one bottle stretch 850 pages.

Author of Contemporary Fiction for Women and Young Adults

a blog for memoir writers